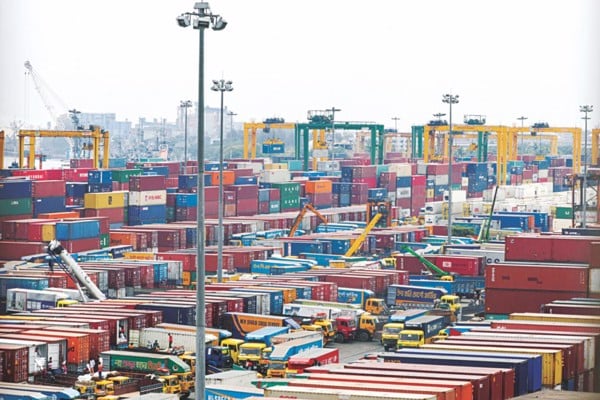 Five days before the start of the holiday, they started sending export cargoes to the 19 ICDs, where 15,010 TEU of export containers were backed up on August 10, up from 8,000 TEU on a normal day, according to Bangladesh Inland Container Depots Association (Bicda).

At present, the ICDs have 69,000 containers, including empty ones and those laden with export and import goods, exceeding the handling capacity of 65,000, reported Dhaka's Daily Star.

By noon on August 10, 300 trucks carrying export goods from Dhaka and surrounding areas were in lined up to enter the ICDs.

Some 90 per cent of the nation's exports are stuffed into containers at the ICDs before being sent to Chattogram (Chittagong) port while the remainder is sent to the Kamalapur ICD and different export processing zones.

Chittagong Port Authority (CPA) is allowing export containers to arrive at the port three hours in advance of ship departure schedules between the eve of Eid and September 1.

Bangladesh Garment Manufacturers and Exporters Association chairman Nasir Uddin Chowdhury said most garment factories will shut down for eight to 10 days during Eid.

To ensure that shipments were made on time, they got their export cargo into the ICDs long before the vacation started, he said. Chattogram-based factories had sent their containers by August 6-7, said Mr Chowdhury.

He alleged that many of their trucks had to wait for at least three days to stand a chance of unloading their cargo since the ICDs had an inadequate number of workers. The exporters also had to absorb the extra cost of the trucks' overstay.