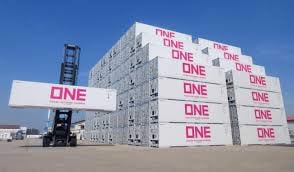 OCEAN Network Express is adding 14,000 reefers, comprising 13,000 40-foot refrigerated containers and 1,000 20-foot units, to its existing fleet. These new reefers will be delivered from the end of July onwards to capture peak season reefer demand from markets in the southern hemisphere.

As part of this order, 2,100 reefers will be equipped with controlled atmosphere technology to extend the shelf life of fruit and vegetables by slowing down produce respiration and ripening rates, reported The Maritime Executive of Fort Lauderdale, Florida.

The integration of "K" Line, MOL and NYK's container shipping business effective from April 1 has enabled ONE to rank among the top three reefer carriers in the world and also strengthened its presence in the major reefer markets of North and South America, South Africa, Europe, the Mediterranean, Intra-Asia and Oceania.

ONE's reefer order is larger than that placed by Hapag-Lloyd last week. The carrier ordered 11,100 reefers that will join its existing fleet of 91,000 units between August and December. Since 2015 Hapag-Lloyd has purchased a total of 30,550 new reefers, including this latest order. Two thousand of the new containers will similarly be equipped with controlled atmosphere technology.

Fresh produce accounts for four per cent of the world's seaborne trade of dry cargoes, according to industry analyst Dynamar. As of mid-2017, "K" Line operated a reefer fleet with a total capacity of 54,000 TEU, MOL's reefer fleet totalled 96,000 TEU and NYK's 86,000 TEU.